Earlier this summer, a friend was in New York for a business trip, and I jumped on the chance to hang out with her. She came up a day early on a sunny, hot Sunday. We agreed to meet at her hotel with another college friend.

First to arrive, I sat in the snazzy hotel lobby. A bit later, I received a text from my friend saying that she had arrived and how about we meet in ten minutes? I looked up and saw her checking in at the reception desk. Not wanting to scare her or interrupt her conversation with the receptionist, I creepily stood behind her at the distance you’d stand behind the customer at a post office counter when you’re next in line (in the U.S. I mean… in France mosey on right up behind that stranger).

We went up to put her bag in her hotel room, which to her surprise was stylishly decorated but did not feature a desk. Considering she was there for work and would need to use her laptop several hours a day, she called reception to inquire about it. They responded that she hadn’t requested one. We were baffled. Even in low-cost motel rooms, I have always seen a bed and a table.

Our friend joined us, and after a leisurely lunch and animated chat at a restaurant in the neighborhood, we took the subway up to the Cloisters, which is built from stone and materials from four French medieval abbeys. It contains art, objects, and tapestry from the Middle Ages. There was a surprising lack of signage leading to its location in Fort Tryon Park. We followed somewhat inclined paths surrounded by trees and plants before reaching the fortified structure. 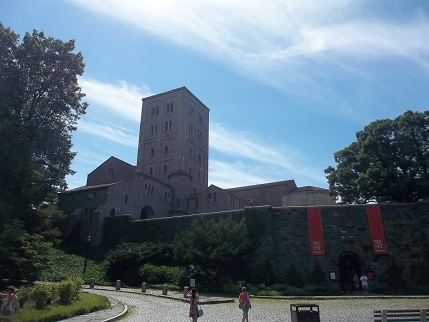 You’ve probably never seen this guy, though. He is an aquamanile from Germany (ca. 1425-50), used for handwashing at the table.

This stained glass window from the cathedral of Notre-Dame in Rouen (ca. 1200-10) depicts a scene from the Legend of the Seven Sleepers of Ephesus. 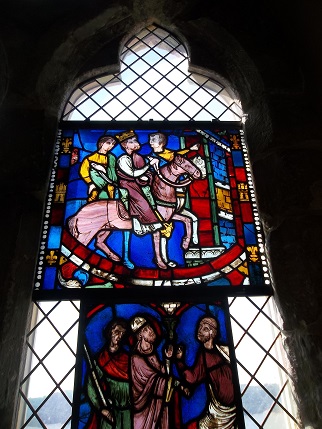 The gardens were lovely.

There was an entertaining garden of plants grouped by use in medieval times: magic and ceremony, arts and crafts, brewing, medicine, vegetables and salads. Plants had funny names like wallflower, scarlet pimpernel, mandrake, common foxglove, catnip, and butcher’s broom. 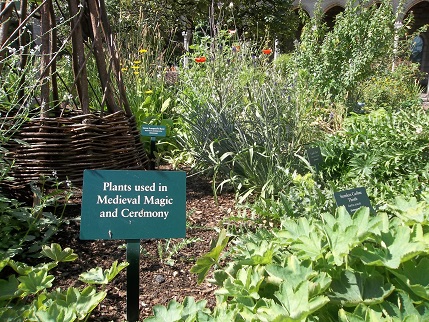 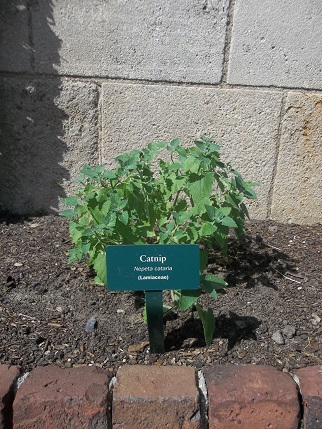 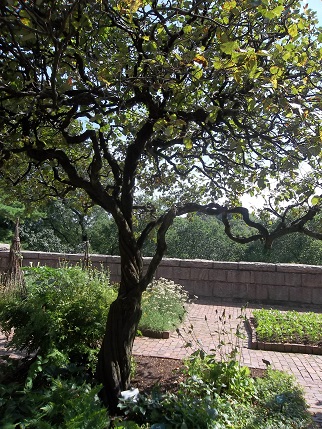 A couple of trees reminiscent of pipes or menorahs stood against a wall.

Our visiting friend had chosen the perfect museum for her trip because she spent time looking at every object and artwork in the building. Meanwhile, our other friend and I sat in one of the peaceful gardens for a while after looking through the Cloisters until she joined us. 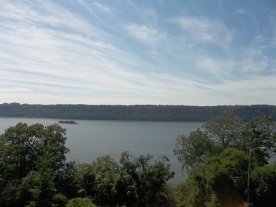 On our walk out of Fort Tryon Park, we took a different meandering path and found a small cave. 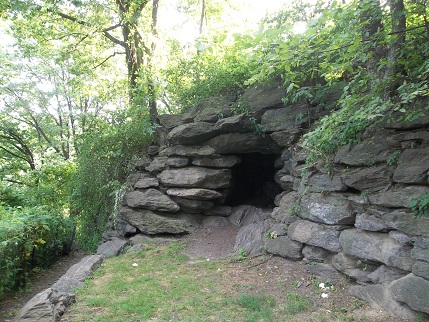 We topped off our day with dinner at an airy restaurant near our friend’s hotel. Old friends and the even older Cloisters, a delicious Sunday indeed.

4 thoughts on “The Cloisters”