Recently two friends and I visited the exhibit “Studio Job MAD HOUSE” at the Museum of Arts and Design at Columbus Circle in New York City. I’m always a bit unsure about suggesting modern or contemporary art exhibits to people who aren’t already interested in those periods or who express bafflement over why a blank canvas is in a museum. I am not a fan of all contemporary art—it is so varied—but I am open to seeing something new and if I don’t like it, all the better to discuss why afterwards.

Entrance to MAD is free on Thursday evenings, so I figured that this would be the perfect time to visit it for the first time with a college friend who enjoys art and a friend who is from France, living in New York for two months, and interested in being introduced to the city.

The exhibit is a collaboration by Belgian artist Job Smeets and Dutch artist Nynke Tynagel.

Welcome to the MAD HOUSE. 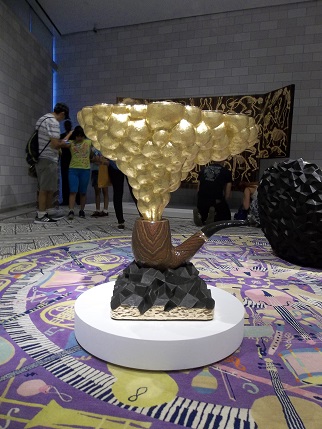 You may have seen artist René Magritte’s late 1920s painting featuring a pipe and the words “Ceci n’est pas une pipe” (This is not a pipe). When I studied it in college, we talked about how the pipe was not an actual pipe, but rather a painting of a pipe. According to the label for the above piece at MAD, the “cast-bronze sculpture plays with the same idea, that all visual representations are inherently abstract; it is neither a table nor a pipe.” Isn’t it a table, though? Concept aside, it was aesthetically pleasing. 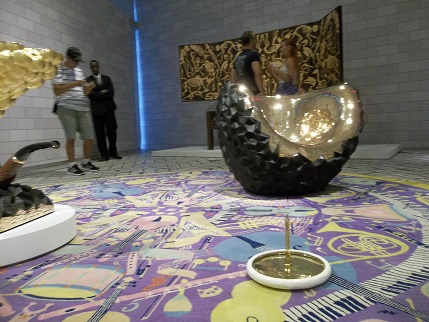 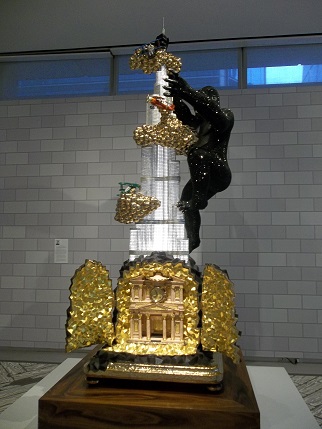 My friend asked me to take a picture of him in front of this eye-catching tower, made in 2013-2014. “Over twelve feel tall, this clock and lamp features a cast-bronze King Kong, covered with 120,000 Swarovski crystals, scaling a silver-leafed Burj Khalifa (the world’s tallest building, in Dubai), which projects from a cast-bronze Petra, the ancient city in Jordan).” 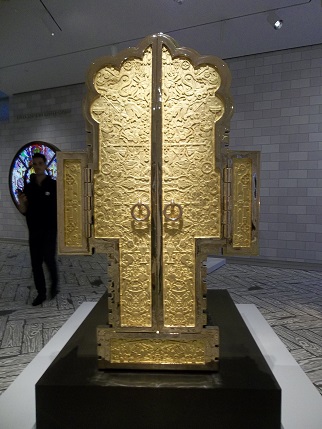 This is a replica of the Chartres cathedral turned on its side. It also functions as a closet. 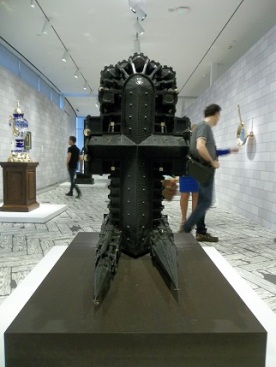 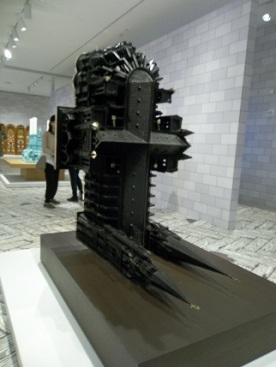 As you may expect, the Chartres cathedral isn’t actually these colors. There was something sinister about seeing the black church laid on its side. 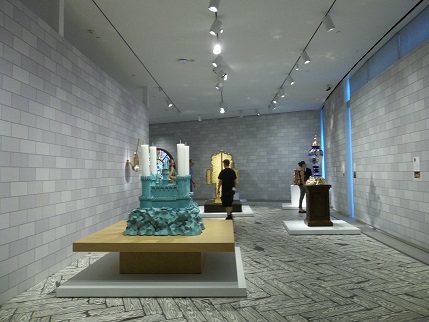 To my delight and slight surprise, my friend who claimed to dislike modern and contemporary art loved the exhibit. We all enjoyed walking around the pieces and pointing out quirks only apparent upon further examination. The rooms of sculpture-objects that combined form and function were whimsical and weird, light and heavy, solid yet fantastical.

At the exhibit, I saw two separate people that I knew wandering around. I was pretty surprised considering that the museum wasn’t that crowded. One of them joined us later for a casual hearty dinner outside near Rockefeller Center. At one point, one of the French guys in our group looked up at the towering skyscrapers around us, smiled, and said, “This is so New York.” I could practically see the stars in his gaze. The other guy agreed enthusiastically, and they relished it for a while. I suddenly saw myself in Paris and how I must have looked to my friends when we crossed a bridge at night and I sighed, “I love bridges here.” Romance in the eyes, awe in one’s exhale. Not to say that I don’t love New York or where I’m from—I do—but I would never say something like “This is so New York” in the context we were in. I’d be more likely to say that if I accidentally bumped into a stranger on the street and they cursed me out.