I was looking through some old books at home and found a paperback collection of American poetry for students. There were a few poems that spoke to me, including:

If you will tell me why the fen
appears impassable, I then
will tell you why I think that I
can get across if I try.

Earlier this year a friend and I visited the George Nakashima furniture studio complex in New Hope, which is literally the first town we entered in Pennsylvania when coming from New Jersey. We had invited a couple of others along, but it ended up being the two of us, a nice girls’ trip. She picked me up in the morning, and we drove along highways and across the Delaware River to arrive at the peaceful grounds.

Funnily enough, only a week or so before I had become aware of Nakashima (1905-90), whose low, wooden table and wide-seated chairs were on display at the Metropolitan Museum of Art in New York. My museum date had wanted to show me them at the Arts of Japan temporary exhibit before it closed. We sat around the table with other visitors. I found the hidden wall label that spoke about Nakashima’s intention to honor the tree.

Now I was seeing the distinctive wooden bow on chairs in his studio miles from the city. My friend and I wandered around the finishing department, the chair shop, and the showroom; took a peek into the main shop; and lingered by a small pond surrounded by a structure that made me feel like we were in Japan.

While my friend and I love nature, we don’t possess the instincts of country girls—at one point, I thought that an alarm was going off and tried to figure out where it was coming from. Then I realized it was the sound of… frogs.

It so happened that a Pride festival was going on in New Hope. We drove on the main street decorated with rainbow flags and found an Irish restaurant for lunch. After, we popped in a few boutiques and a coffee and doughnut shop before driving back.

I’ve mentioned the woodworking studio to friends, and no one has known about it. It was an easy, relaxing getaway for a few hours. 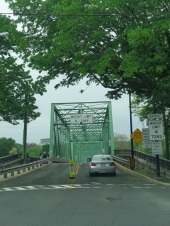 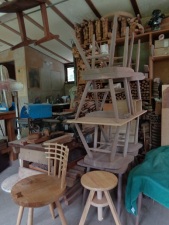 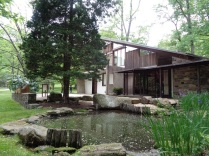 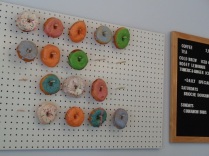 If you step on the New York subway, you may notice the Poetry in Motion series. Generally a subway ride is not very poetic, so all the more I appreciate a piece that makes me cock my head and feel something.

What Do You Believe A Poem Shd Do?

quite simply a
poem shd fill you
up with something/
cd make you swoon,
stop in yr tracks,
change yr mind,
or make it up.
a poem shd happen
to you like cold
water or a kiss.